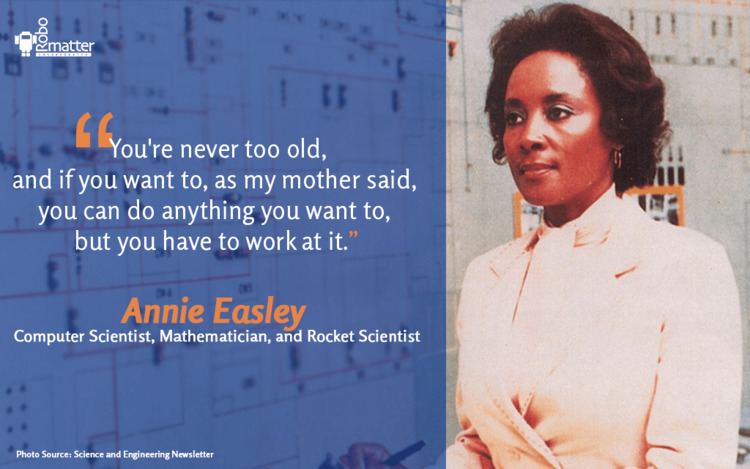 Raised by a single mother who told her she could do anything she wanted as long as she worked at it, Annie Easley (1933-2011) born in Birmingham, Alabama became one of the first African American computer and rocket scientists. She became one of the first African American women to be hired by NASA, specializing in computer programming and alternative energy technologies over the course of her 34-year career.

The daughter of Samuel Bird Easley and Mary Melvina Hoover was born April 23, 1933 and grew up in pre-Civil Rights Movement Birmingham. From the fifth grade through high school, Easley attended Holy Family High School, a private, Roman Catholic high school in the Ensley neighborhood of Birmingham, where she was valedictorian of her graduating class.

In 1950, Easley attended Xavier University of Louisiana in New Orleans for two years where she majored in pharmacology. In 1954, the Birmingham native briefly returned home and used her college education to help African Americans pass a Jim Crow-era discriminatory literacy test on Alabama’s history to secure their right to vote. Also, while in Birmingham, she briefly served as a substitute teacher in Jefferson County, AL., before marrying and moving with her husband to Cleveland, Ohio.

After moving to Cleveland in 1955, Easley was informed that the only pharmacy program in the region had just closed, so she had to find a different career. Easley ran across an article in a local Cleveland newspaper about twin sisters who worked as “human computers” at the National Advisory Committee for Aeronautics (NACA) that piqued her interest. Easley applied for a job the next day and was hired two weeks later – she was one of four African Americans of about 2500 employees. Easley began her career as a mathematician performing complex mathematical calculations for the engineers by hand at the NACA Lewis Flight Propulsion Laboratory, which is now known as the NASA John H. Glenn Research Center in Ohio. She continued her education while working for the agency, and in 1977, obtained a Bachelor of Science in Mathematics from Cleveland State University. As part of a continuing education, Easley worked through specialization courses offered by NASA.

Letting nothing stop or discourage her, when human computers were replaced by machines, Easley evolved along with the technology and learned computer programming. She developed computer code for analyzing alternative energy technologies for electric vehicles, and some of her work led to battery development for hybrid cars. She was a leading member of the team which developed software for the Centaur, a booster rocket that launched spacecrafts such as Cassini. While at NASA, Easley also took on the role of equal employment opportunity counselor, helping address discrimination complaints regarding race, gender, and age.

Easley’s work at NASA provided the technological foundations for some of the most important inventions of the 20th century including launches of communications, military satellites, weather satellites, and storage batteries. Her work contributed to the 1997 flight to Saturn of the Cassini probe, the launcher of which had the Centaur as its upper stage. Throughout her career, Easley contributed to numerous programs as a computer scientist, inspired many through her enthusiastic participation in outreach programs, broke down barriers for women and people of color in science, technology, engineering, and mathematic (STEM) fields, and won the admiration and respect of her coworkers. Many who knew her would say that it was not just the work that she did that made a difference; it was her energy and positive attitude that had a tremendous impact.

Similar to Easley’s tech work at NASA, iSeek’s technology consulting professionals develop winning strategies that align the right technologies with business goals. At iSeek Solutions, we exceed for our clients when we are tasked with analyzing and enhancing hardware and software investments when performing technology evaluations and benefit analysis, architecting and deploying technology to ensure alignment between business and technology, and optimizing performance and managing expenses.

Easley retired from NASA in 1989. She skied, played tennis, and volunteered. She worked part-time in real estate and occasionally tutored. She passed away at age 78 in 2011, but her legacy, impact, contributions, and groundbreaking work continues to shape and advance our world today.

At iSeek, we admire Annie Easley’s tenacity and understand the importance of contributing and giving back to the community. We are proud to recognize and celebrate Easley’s accomplishments.

To learn more about Annie Easley and her contributions to history visit: https://www.nasa.gov/feature/annie-easley-computer-scientist

The Difference Between Success and Failure Begins with a Good Decision