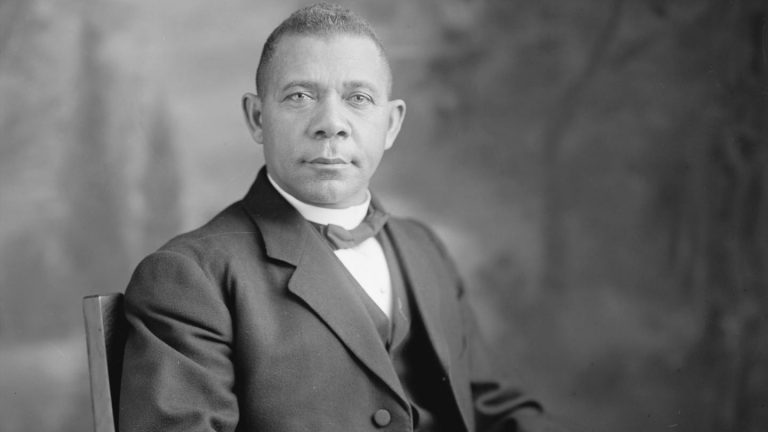 Founder of the Tuskegee Normal and Industrial Institute (now known as Tuskegee University) in Tuskegee, Alabama in 1881, Booker Taliaferro Washington (1856-1915) was an educator, orator, author, and one of the most influential African American leaders of the late 19th and early 20th centuries.

Washington was committed to improving the lives of African Americans after the Civil War. He advocated economic independence through self-help, hard work, and a practical education. His drive and vision built the historically black college of Tuskegee University into a major African American presence and place of higher learning. The university focused on training African Americans in agricultural pursuits, grew immensely, and became a monument to his life’s work. Through progress at Tuskegee, Washington showed that an oppressed people could advance.

On April 5, 1856, Washington was born into slavery on a plantation in Franklin County, Virginia. His mother, Jane, worked as a cook for plantation owner James Burroughs and his father was an unknown white man from a nearby plantation. At an early age, Washington went to work carrying sacks of grain to the plantation’s mill. With his size, hauling 100-pound sacks was hard work for a small boy, and he was occasionally beaten for not performing his duties satisfactorily. Peering into a schoolhouse near the plantation seeing children his age sitting at desks and reading books was Washington’s first introduction to education. He wanted to do what those children were doing, but he was a slave, and it was illegal to teach slaves to read and write.

After the Civil War, Washington, his siblings, and his mother moved to Malden, West Virginia, where she married freedman Washington Ferguson. Coming from a poor family, nine-year-old Washington went to work in the nearby salt furnaces with his stepfather instead of going to school. Washington’s mother noticed his interest in learning and got him a book from which he learned the alphabet and how to read and write basic words. He was still working at the time, so he got up nearly every morning at 4 a.m. to practice and study before work. It was around this time, Booker took the first name of his stepfather as his last name, Washington.

In 1866, Booker T. Washington got a job as a houseboy for Viola Ruffner, the wife of coal mine owner Lewis Ruffner. Mrs. Ruffner was known for being very strict with her servants, especially boys. Ruffner saw something in Washington — his maturity, intelligence and integrity — and soon warmed up to him. Over the two years he worked for her, she understood his desire for an education and allowed him to go to school for an hour a day during the winter months.

Determined to educate himself, in 1872, Washington left home and traveled 500 miles under great hardship until he arrived – broke, tired, and dirty – at Hampton Normal Agricultural Institute in Virginia. Along the way, he took odd jobs to support himself. He convinced administrators to let him attend the school and took a job as a janitor to help pay his tuition. The school’s founder and headmaster, General Samuel C. Armstrong, soon discovered the hardworking Washington and offered him a scholarship, sponsored by a white man. Armstrong had been a commander of a Union African American regiment during the Civil War and was a strong supporter of providing newly freed slaves with a practical education. Armstrong became Washington’s mentor, strengthening his values of hard work and strong moral character.

Washington graduated from Hampton in 1875 with high marks and taught at his old grade school in Malden, Virginia. In 1879, he was chosen to speak at Hampton’s graduation ceremonies, where afterward General Armstrong offered Washington a job teaching at Hampton. Two years later, in 1881, the Alabama legislature approved $2,000 for a “colored” school, the Tuskegee Normal and Industrial Institute. General Armstrong was asked to recommend a white man to run the school but instead recommended Washington. Classes were first held in an old church, while Washington traveled extensively all over the countryside promoting the school and raising money. His achievements at Tuskegee earned him widespread support. An assertive, hands-on principal, Washington attended to every detail, from overseeing faculty and students, to school publications. He monitored the quality of instruction, inspected campus grounds and buildings, and scrutinized students. The university grew immensely and focused on training African Americans in agricultural pursuits.

Washington personally made sure that Tuskegee maintained its excellent reputation. On the other hand, he also reassured whites that nothing in the Tuskegee program would threaten white supremacy or pose any economic competition to whites.

A skilled politician and major political force, Washington developed relationships with blacks, whites, farmers and businessmen in the North and the South, but not everyone agreed with his views. Washington urged blacks to accept discrimination for the time being and concentrate on elevating themselves through hard work and material prosperity. While politicians and presidents sought him out, some in the African American community, such as W.E.B. Du Bois, saw him as a traitor and criticized the extent and use of his power and influence. President William McKinley visited Tuskegee. In 1901, Washington dined at the White House with President Theodore Roosevelt making him the first African American to be so honored. However, the fact that Roosevelt asked Washington to dine with him (inferring the two were equal) was unprecedented and controversial, causing an uproar among whites. Both President Roosevelt and his successor, President William Howard Taft, used Washington as an adviser on racial matters, partly because he accepted racial subservience.

Washington’s controversial Atlanta Exposition speech in 1895 (Atlanta Compromise) appeared to support separate development as a “”necessary condition for economic cooperation between the races.”” He said “”In all things that are purely social, we can be as separate as the fingers, yet as one hand in all things essential to mutual progress.”” The speech brought him fame as well as criticism. Many believe that Washington’s address laid the ground for state supported segregation. Dedicated to the continued existence of Tuskegee, Washington secretly supported many black causes for equality. For Washington, education and hard work led to economic independence, and then to political rights.

Washington remained the head of Tuskegee Institute until his death on November 14, 1915, at the age of 59, of congestive heart failure. Washington’s funeral was held on November 17, 1915, in the Tuskegee Institute Chapel, and was attended by nearly 8,000 people. He was buried on campus in a brick tomb, made by students, on a hill commanding a view of the entire campus.

Under Washington’s leadership, Tuskegee became a leading school in the country. At his death, it had more than 100 well-equipped buildings, 1,500 students, a 200-member faculty teaching 38 trades and professions, and a nearly $2 million endowment. Washington put much of himself into the school’s curriculum, stressing the virtues of patience, enterprise, and thrift. He taught that economic success for African Americans would take time, and that subordination to whites was a necessary evil until African Americans could prove they were worthy of full economic and political rights. He believed that if African Americans worked hard and obtained financial independence and cultural advancement, they would eventually win acceptance and respect from the white community.

In addition to his contributions in education, Washington contributed to the Progressive Era by forming the National Negro Business League. It encouraged entrepreneurship among black businessmen, establishing a national network. Washington also authored and co-authored many books that reflected his ideas on education and society. Up Slavery, his autobiography written in 1901, has been translated into many languages and is still widely read today. He was awarded many honorary degrees, including degrees from Harvard and Dartmouth Universities. The American people recognized his extraordinary achievements with a commemorative US postage stamp in 1940; in 1956 when his birthplace became Booker T. Washington National Monument; and again in 1974, when his residence at Tuskegee Institute, The Oaks, became part of the NPS Tuskegee Institute National Historic Site.”

His work greatly helped blacks to achieve education, financial power, and understanding of the U.S. legal system. This contributed to blacks’ attaining the skills to create and support the civil rights movement, leading to the passage in the later 20th century of important federal civil rights laws.

At iSeek we admire Booker T. Washington’s passion for education and hard work and understand the importance of professional and personal development. We are proud to recognize and celebrate Washington’s accomplishments, legacy, and leadership.

To learn more about Booker T. Washington and his contributions to history visit: https://www.tuskegee.edu/discover-tu/tu-presidents/booker-t-washington

The Difference Between Success and Failure Begins with a Good Decision