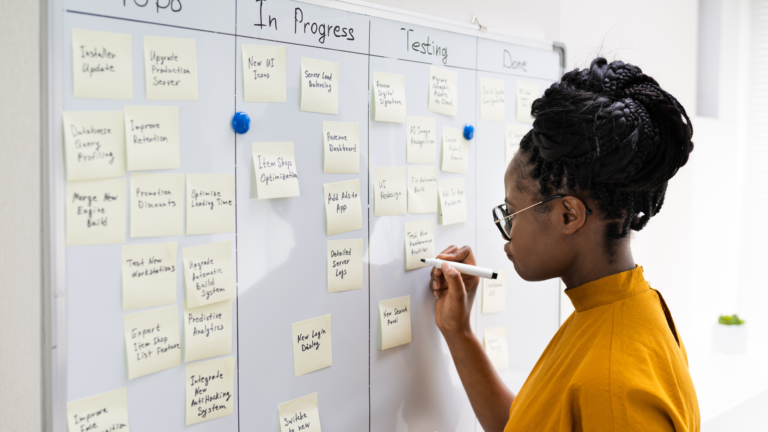 Flashback to the 1950s: In an effort to find new ways to reduce waste and increase efficiency, Japanese auto manufacturer, Toyota, sent a team to Michigan, USA, to learn American manufacturing techniques from Henry Ford and Ford Automotive. Taiichi Ohno and his colleagues, however, did not find all their answers in the American method of automobile manufacturing. Instead, they found inspiration at Piggly Wiggly supermarket. Ohno was intrigued by the visual clues Piggly Wiggly used to indicate that a product should be reordered and restocked. He observed cards strategically placed on certain food containers within each section of product. The product was not reordered and restocked until the tagged container was reached.

Ohno’s observations laid the foundation for Lean manufacturing and Kanban (from the Japanese word meaning “signboard”). The resulting Toyota Production System built upon the framework of “just-in-time” manufacturing, that is, responding to market demand without wasting time or resources by creating surplus. According to Toyota’s The Toyota Production System – Leaner Manufacturing for a Greener Planet, the basic concept was to make only what was needed when it is needed, and not to stockpile by making automobiles or ordering raw materials in advance. Much like Piggly Wiggly, Toyota placed visual cues at the point at which more cars would need to be manufactured and additional raw materials ordered. By doing this, Toyota’s just-in-time manufacturing method would significantly eliminate waste.

Fast Forward to the 2000s: Ohno intuitively suggested that industries beyond vehicle manufacturers could benefit from the application of Lean principles. His assumption was correct, and in the first decade of the 21st century, other industries, including IT, were adopting Lean and Kanban concepts.

Kanban must not be thought of as a software development lifecycle process or a project-management process. Kanban is a change-management technique that requires making alterations to an existing process.

David Anderson, originator of The Kanban Method and author of KANBAN: Successful Evolutionary Change for Your Technology Business, created the “virtual Kanban board” when he made work processes visible to his team of developers. In traditional forms of project management, when a developer completes a project task, they push the work to the owner of the next related task. Anderson’s concern was that work would pile up on the recipient’s desk before the developer had time to get to it. Kanban practitioners believe that much of this piled-up work, in addition to traditional project management planning activities, represents wasted energy and overhead.

People uniformly spend too much time estimating the size, costs, and impacts of their work. They over plan up front and as context changes, they find themselves endlessly modifying their original assumptions. Planning should occur with minimal waste; it shouldn’t become overhead.

A Kanban board contains columns which represent the workflow process and cards (such as sticky notes, etc.) which represent work items. When a Kanban team member completes one work item, they move the item on a physical or digital board to a holding column from which team members select or pull, their next task based on the current urgency of, or demand for, the work. This limits the work in progress to smaller, bite-size amounts and improves workflow.

A Kanban system is more than sticky notes on a wall.  Visualizing workflow is the basis of Kanban.  Visualization is also integral to keeping  Kanban’s pull system effective. To provide more context, below are the six practices at the heart of Kanban (from Kanbanize.com):

Carefully and precisely plan the workflow. Create columns on the board that accurately represent each stage of the work process.

After setting up the Kanban board, stop pushing work and start pulling it only when there is a demand for it.

Control the amount of work that gets in and out of the workflow by placing limits on the number of work items in progress (WIP) in each column. This will reduce work item lead time and ensure the workflow is as smooth as possible.

Break down work into tasks that require only a few days to move from the first to last columns. As a result, not only will the cycle times of work assignments be reduced, but the bandwidth of your pull system will increase.

Pull ‘signals’ will allow a team to understand when a task is ready to be moved to the next workflow stage. Create additional columns, such as “Review” or “Validate”, to function as pull signals on the board. This indicates to the team that these work items are ready to pull forward.

Even with workflow precisely represented on a Kanban board, bottlenecks can happen. If a bottleneck is identified, find the source of the problem and determine the measures that should be taken to prevent or remove it.

When these practices are followed, the Kanban team should notice the following benefits: